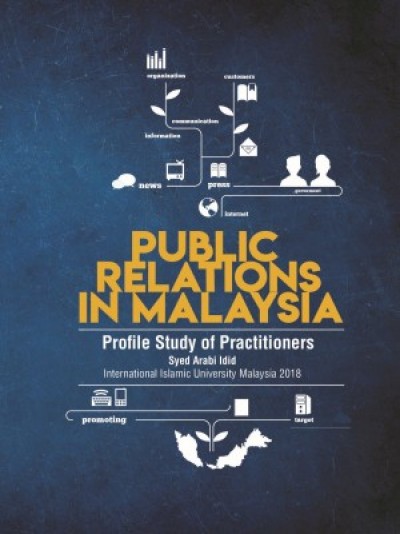 This monograph focuses on the development of public relations and the well-being of practitioners in Malaysia. It discusses the reasons for the growth of public relations, drawing insight from findings based on four studies that were conducted in 1977, 1992, 2002 and 2011 thus giving a trend perspective, a rarity approach in studying a particular subject. The fifth study is on the way and the findings would be released soon. Public relations has become a global practice with international public relations making waves in academia. Public relations as a field of practice and as an academic field has evolved over a period of time with its growth seen in a global context or on a on a country basis. Public relations has been portrayed in the media in a negative manner over the years but it has also been highlighted positively. This study will provide, among others, on the profile and roles of public relations practitioners; the use of social media; the ethical values and professionalism of practitioners; and the satisfaction level in practice. In sum the monograph will illustrate the challenges faced by the practitioners in giving service to the organization and society. The monograph begins by viewing the development from the historical perspective. The history of public relations in one country does not represent the history of global public relations. Hence, public relations icons like Edward Bernays or Ivy Lee of the United States or Stephens Tallents in Britain are just part of the public relations history because there are figures in other countries who contributed to the growth of the field. Together they contribute to the global history and understanding of public relations. Studies from different countries on different aspects of the field would shed light to the ever-growing practice of public relations. The history of public relations in Malaysia by itself suggests several issues that could be taken up at the international level. It was said to begin during the Colonial Period and made its way through the pages of history until Malaysia achieved its independence and with the formation of Malaysia in 1963. The setting up of the Departments and, later, the Ministry of Information (given its different callings) and the Institute of Public Relations Malaysia (IPRM) made much impact on the development of public relations in the country. This study will, among others, focus on the profile and roles played by public relations practitioners; the use of social media; the ethical values and professionalism of practitioners; and the level of satisfaction felt in practice. The survey method was used to analyse the answers obtained an of 329 practitioners. The population was stratified by organizations in the public and private sectors and also by states. This was the most comprehensive study undertaken in so far to obtain a list of practitioners. The previous three studies managed to get 186 respondents in 1977, 188 respondents in 1992 and 311 respondents in 2003. The study was satisfied that a fairly sizeable number was obtained to provide a profile of the practitioners in Malaysia in 2011. There were changes in several areas including education and length of service, with more graduates entering the field as a career but the findings suggest a high turnover of staff. The entry of females into public relations was gradual but the percentage increased tremendously in the 2000s. The opening up of opportunities in public relations and the increasingly more females had taken advantage of the education has made it possible for the feminization of the field, a picture that is similar to the other profile in other countries. In 1977, 30 percent of the public relations professionals were females, but by 1992, the number of female practitioners rose to 47 percent and increased to 55 percent in 2003 and 61 percent in 2011. Malaysian practitioners performed several roles but a factor analysis grouped them as performing three, namely as “Public Relations Manager”, the second factor as Public Relations Administrator and as the “Communication Technician”. The findings also found the practitioners to be satisfied with their work, citing cordial peer relationship and an appreciation of work by management. The practitioners were also gauged on the index of professionalism and their opinion on ethics to make this reading on the profile of practitioners in Malaysia worthy of reading. The findings were normally analysed by gender and level of education to provide a better understanding of the practitioners of public relations in Malaysia.